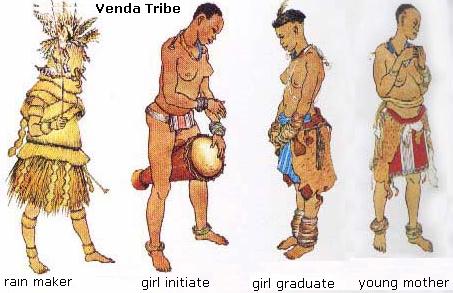 Venda people rituals and myths are part of the lives of this tribe. The Venda people from the Northern Province in South Africa have close ties with the Shona people who built the great stone structures of Zimbabwe. Both these tribes wear similar traditional African clothing.

Figure 1 represent a Muwhira a rain dancer who has the ability to bring rain. His clothing is typical of rain dancers and and is made of fibers and grasses. The helmet mask contains feathers. The arm and leg bands are made of the same materials.

Figure 2 A drummer of the domba school beats (on a djembe) the rhythm for the snake dance, performed by girl initiates. Her dress consist of a loin cloth beaded necklace leg and armbands.

Figure 3. A young female graduate of the domba school is dressed in new clothing and ornaments including a feather as a sign of maturity. Her outfit comprises loin cloth, traditional skins and tassels, necklace, with a numerous arm and leg bands.

Figure 4. A young mother has tied a thong around her waist as a mystic bond with her baby to prevent it crying while she is away working out in the fields. 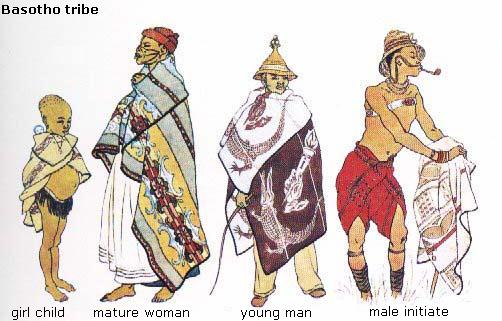 Basotho People: Winters in Lesotho are bitterly cold, consequently blankets play an important part in the national dress. They are brightly colored and patterned, and often carry motifs to commemorate important national events.

Figure 1: A young Basotho girl wears a fiber skirt and a blanket with motifs. A small hand carved wooden doll is tucked in under the blanket on her back.

Figure 2: Over her full length skirt, a mature woman wears a blanket with a motif loosely based on the outline of a traditional Basotho shield.

Figure 4. A graduate from the initiation school wears a bright loin cloth. and a blanket along with a fiber hat. Great secrecy surrounds the initiation of young Basotho men. 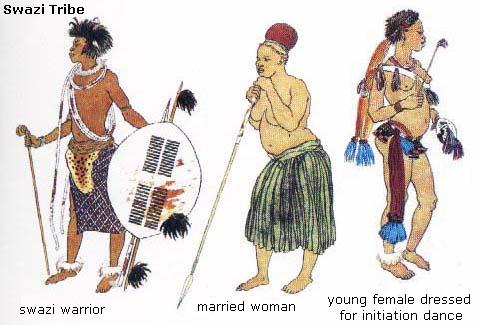 Traditional Swazi clothing: The Swazi along with many African tribes favors bright clothing with bold designs.

Figure 2. The built up and ochre styled hair of this woman's hair marks her as a married woman. She wears a long skirt made from natural fibers. Whereas unmarried young women and girls frequently wear their hair loose i.e. without hair covering.

Figure 3. Tassels and streamers form part of the costume of a Swazi girl dresses for an initiation dance celebration. She carries a switch and ornamental shield along with traditional head gear, jewelry loin cloth and tassels.