The djembe has a great cultural heritage in Africa. Although similar in cultural use and significance to many countries and tribes on the African continent, it has minute but significant differences. The Djembe of the Mandinka people, and its origins dates back to the great Mali Empire of the 12th century. The djembe is also known as djenbe, jembe, sanbanyi, jymbe or yembe. It is made from a single piece of wood and carved into the shape of a goblet that is hollow throughout with a skin covering over the top. The drum is played with bare hands.

Of all the African drums, the djembe has become extremely sought after in the western world and is regarded as the most popular. This drum has inspired master drum makers now found all over the world. The djembe below is made in Mali. In and around the Kayes region. The drum rhythm or Diansa is performed in the evening for most celebrations, example during full moon, spring, summer and winter harvesting time, weddings, baptism, honoring of mothers, immediately after Ramadaan (the month of fast for all Muslim brothers and sisters) or other celebrations. Dancing is the most popular form of entertainment and various rhythms and beats are played on the djembe. Similar type celebrations and cultural rhythms are applicable to Senegal as well as other regions of West Africa.

Before a new skin is placed over the drum head the dried skin is immersed in water until soft and pliable. The soft skin is then placed over the top along with two steel rings, one ring fits tightly around the drum head and the other around the bottom of the head with vertical string crossing from top to bottom around the rings. The rope is then gently tightened. Once the skin is completely dried the ropes are further tightened with a rope puller. Various patterns or weaves are then made with the rope on the drum 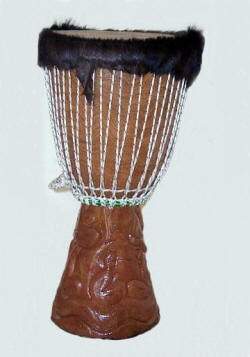 African goatskins from Mali are the most suitable for covering the playing surface of a djembe, due to central Africa having the perfect climatic and grazing conditions for the goats. The West African goat skin are also thicker and tougher and impacts greatly on the quality of the sound. The skins therefore undoubtedly, provide the very best sound. Skins used from other countries have poor sound quality and tends to break more easily.

African drummers from the Wolof tribe, natives of Senegal. They use a skin drum and it is played with one hand and a thin stick. The drum is placed on the ground or strapped to the side of the body and is played whilst the fans or audience, mainly single women of marital age, do the "Sabar". A dance where women roll the hips and create movements of the buttocks in a provocative manner, to entice males. Various forms of the dance take place in Africa during special celebrations.

The Djembe sizes normally range between 6 inches in diameter x 12 inches length, up to 18 inches in diameter and 40 inches in length. The density of the, hollow carved goblet shape, quality of the goat skin and the rope determines the wide range of tones. Because all drums are hand made, each one gives off a unique deep base note. The primary notes are "tones" and "slap" a variety of other sounds are also produced by advanced players.

Get into the African spirit by adding one these hats to your wardrobe. Various colors available read more by clicking this link Djembe drummers favorite hat.