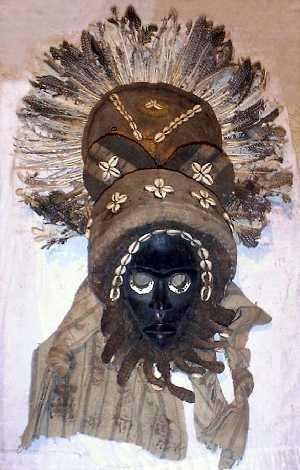 Dan people classify surroundings into two realms - the village with all inhabitants (human realm), and the forest (bon) (spirit realm) where the spirits reign, and wild animals roam freely. The forest is regarded as sacred, and crossing the boundary between the human realm, and the spirit realm, may only be done by saying a prayer and wearing materials from both worlds. This creates a link between the two realms. The mask depicted to the left is a perfect example of the materials. These types of masks are made and worn exclusively, by male dancers and only carved by initiated members of the male Poro society. The mask served to protect the young initiate against destructive or evil forces from the time of initiation, till he one day enters the spirit realm.

Once the male mask dancer dons the mask, he is transformed into a spirit. The mask dancer goes into a deep trance during rituals and brings forth messages of wisdom from his forebears. The messages is inaudible and in uncontrollable utters, a wise man accompany the dancer during the ritual and translates the messages. The messages are often words of great wisdom, prescribing a way of life that will lead to longevity, health and prosperity.

The cowry shells not only represent a decorative function, but also indicate that the sprits have blessed the young initiate with wealth. (In the past cowry shells was used as money). The feathers signify beauty and the ability to take flight if danger arises. An important feature of initiation masks is that ears are not represented.

Boys enter training at a young age and remain at the training camp for several years, until they are initiated as adults into society. A portion of the young men's training consists of tribal tradition, principals and moral values. A spirit who wants to be given a bodily form visits these initiated males in a dream. Following the dream, the adult males have to give life to the spirit, in the form of a mask.

Before the actual carving process the adult male cleanse himself, then sets off to the forest to find a suitable piece of wood. When he reaches the initiation camp, he commences with the carving. On completion of the mask, he carefully plans the song, music and dance, which are to accompany the initiation ceremony.

After the initiation ceremony the young man heads off home and is now ready to enter into serious relationship with the young women of marital age that will eventually lead to marriage. The mask will remain in the family and community for years, and will eventually be passed down through the generations.

History of the Dan people from Liberia.

After centuries of brutal oppression and exploitation, slaves were finally emancipated in the USA. Some of these people dearly longed to come back to Africa, their wish were granted. On arrival they discovered that they were reallocated on "free" land now known as Liberia. Although these "free blacks" still practiced some of the traditions, they were a mixed group of people that practiced different customs. Neighboring tribes mainly from the Ivory Coast influenced the "free blacks" and the dominant Dan tribe took root in Liberia.

Dan_mask_NIA_0236.jpg (18585 bytes)Dan mask to the left was also used during initiation ceremonies: The black around the mouth area indicates a judiciary function or wise man that normally aids the king during important decision-making, concerning the inhabitants of the tribe. The seashells indicate that the initiate lived close to the coastline of Liberia.